There are several studies, one recently completed and the other ongoing, using vitamins to determine whether or not they provide protection or relief from bouts of canker sores, or recurrent aphthous stomatitis (RAS).  The first study, completed in 2009, revealed that a daily multivitamin showed no significant changes for frequent sufferers. However, a second study builds on an earlier one that showed that vitamin B12 was an effective treatment. This new study uses  varying doses of vitamin B12 to find the optimal dosage for best treatment. 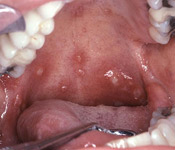 This study was conducted from Dec 2005-July 2009 by the University of Connecticut Health Center with collaboration by the Donaghue Medical Research Foundation to find out if ingesting a daily multivitamin affected the number of canker sores and the length of the outbreak. Earlier research has shown that people who are susceptible to getting canker sores were often deficient in one or more vitamins. Scientists found that correcting vitamin deficiencies reduces the quantity and duration of mouth ulcers.

This was a double blind, placebo-controlled study with 160 participants who had a history or at least three episodes of canker sores.  The members were randomly assigned to either receive the vitamin supplement or a placebo pill. The experimental group received a multivitamin with 100% of the U.S. reference daily intake (RDI) of vitamins A, B1, B2, M3, B5, B6, B9, B12, C, D, and E. The Placebo group received a gelatin capsule containing lactose. Both groups were asked to take the capsule daily for one year.

The study looked at the annual number and duration of canker sore episodes and assessed the pain levels and the impact on eating and drinking.

The results of the study indicated no significant difference in the number of new canker sore episodes between the multivitamin and placebo groups. The mean number of new outbreaks was 4.19 for the multivitamin group and 4.6 for the placebo recipients. There was also a similar mean duration among the two groups, 8.66 days vs. 8.99 days and there was no difference between the two groups in terms of pain or ability to eat a normal diet.

Unfortunately, the conclusion to be drawn is that a daily multivitamin containing the RDI did not reduce the number or duration of canker sore outbreaks. This is not that surprising, because the daily RDI for vitamin B12 (Cobalamin), a common deficiency for canker sore suffers, is a mere 2.4 mcg, which is not very much. A study done by the Ben Gurion University in Israel using a nightly 1000 mcg nightly dose of vitamin B12

found that it significantly reduced the frequency, severity and duration of mouth sores in study participants. While it is know this dose is effective, it is not clear what the optimal dose of B12 might be. That leads to the newest study underway, detailed below.

There is a new  study by Meir Medical Center in Israel currently underway that seeks to assess the influence of different doses of Vitamin B12 on RAS.  As noted above, it was previously found that sublingual vitamin B12 treatment in the amount of 1000 mcg daily for six months was effective for people suffering from  frequent canker sores. Therefore this study proposes to assess how different dosage levels of vitamin B12 affect the frequency and severity of recurrent aphthous stomatitis.

The randomized, double blind, intervention study consists of 225 patients divided into three groups of 75. The first group will receive a sublingual 1000 mcg of vitamin B12 per daily  for six months. The second group will receive  a 100 mcg sub lingual daily dose for six months, while the third group will receive 2000 mcg for the same time period. The participants will fill out a daily  journal documenting the frequency and severity of their canker sore episodes during the 12-month period. The main purpose of this study will be to identify the best dose of vitamin B12 to attain the quickest and longest remission from outbreaks. This will allow researchers and medical professionals to ascertain the optimal dosage to provide the best treatment for RAS.

This is very exciting news for sufferers of RAS. The study began in June 2012 and the estimated primary completion date is July of 2013, with the final study completion set for September 2014. We will continue to follow this study and report the results when they are made available.

← Can A Gout Drug Cure Canker Sores?
Are Recurrent Canker Sores a Sign of Gluten Sensitivity →