The exact cause of canker sores, those extremely painful and annoying, small round ulcers that can appear inside the mouth, is not fully known. Experts believe there is more than one trigger but they do not appear to be caused by viruses or bacteria. While not contagious, they tend to run in families. 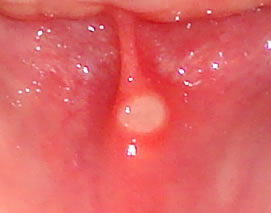 Canker sores, also known as mouth ulcers or aphthous stomatitis,  affect approximately 80% of the U.S. population sometime in their life and often first appear between the ages of 10 and 20. While anyone can develop a mouth ulcer, twice as many women as men get them. There may be an allergic reaction to certain foods or a minor injury to the mouth may trigger them. There is some research that indicates problems with the body’s immune system may be involved for some people. Canker sores are not cold sores or fever blisters, which only appear on the outside of the mouth, nor are they associated with herpes viral infections.

While there is no single cause of canker sores, there are a variety of factors that may be involved in triggering a lesion:

Who is More Likely to Get Them?

While no one is certain what causes canker sources, if you get frequent outbreaks most doctors recommend that you  undergo blood and allergy tests to see  if your ulcers are caused by a nutritional deficiency, an allergy or another  preventable cause.